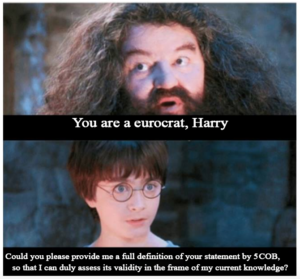 While everybody else was thinking of becoming an astronaut or a princess, a trainee, as a child, had only one dream: “Working in the European Institutions”. And they never gave it up! They sent their cv, they filled in creative motivation letters, they learned to use the ugly ECAS website, they got rejected over and over again; until, one bright day, they passed the first and second shortlisting process, they were successful in the DG interview and finally were green-lighted to move to BrusselsBrussels (abbr. BRU, French: Bruxelles; Dutch: Brussel), officially the Brussels-Capital Region (French: Région de Bruxelles-Capitale; Dutch: Brussels Hoofdstedelijk Gewest), is a region of Belgium comprising 19 municipalities, including the City of Brussels, which is the capital of Belgium. The Brussels-Capital Region is located in the central portion of the country....

There are three main types of trainees (or stagiaire if you want to dive deep into the EU jargon):

A fourth, infamous category, are the stagiaires atypiques, who are not paid and work only a few weeks, respecting an old heritage, probably dating back to the time of the pyramids, as explained by the Commission: “Unpaid internships were not invented by us. It is a tradition for several international organizations like the United Nations”.

To be fair, the traineeship is well paid, considering you are supposed to be coached towards professional maturity. That doesn’t mean you can drink champagne at PluxPlux, short form of Place du Luxembourg/Luxemburgplein, is the institutional afterwork meeting place just outside the European Parliament. On a summer Thursday evening, it is customary to meet there with colleagues, enjoying a good Belgian beer and some ugly, deafening disco music. The hierarchic level of the people taking part... every day, but what you get is more than Southern Europeans’ entry-level salaries.

Trainees usually have better CVs and competences than 80% of the MEPsA Member of the European Parliament (abbr. MEP) is the living proof that eurocrats are elected by the people, as in every well-functioning democracy. They change every five years, which is more or less the time they need to get a basic idea of how the European Union works. They...: they speak at least six languages, they hold prestigious academic degrees, they founded start-ups, volunteered in third-world countries and even went to the College of Europe. As such, in the weeks before starting their job, they expect to be welcomed by the President of the Commission, have lunch breaks with senior functionaries and romantic dates with Ursula von der Leyen or Frans Timmermans. 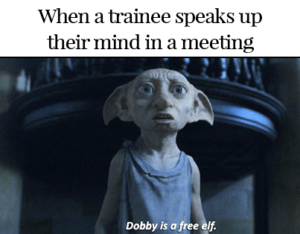 According to DG MEME statistics this is rarely the case (though reading the official testimonial page you might think otherwise). Most trainees end up doing demeaning jobs or nothing at all (which some might see as a preparation for senior officials’ tasks). “It’s nobody’s fault: the institution is too big and unpredictable, so planning tasks a few months ahead is virtually impossible”, explained the Head of Unit for Economical Foresight. 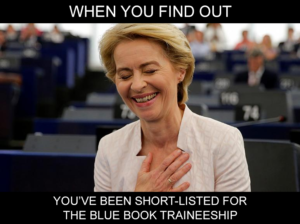 Nevertheless there are many positive sides to being a trainee: one can hang out at the coffee machine, attend political meetings and get an insight into the functioning of this giant administrative and political machine. Socializing with fellow trainees, who are often remarkable people, is also an important activity. And you might still strike it lucky and end up in a Unit where your job is appreciated. Or take the lift with the President of the European Central BankThe European Central Bank (ECB) administers monetary policy within the Eurozone. The bank's capital stock (€10,825,007,069.61) is owned by all 27 central banks of each EU member states. That's why it's very hard for a country to leave the Union: nobody would know how to split the 61 cents. The... (true story).

Don’t forget that even Margrethe Vestager, Commissioner for Competition and Digital Age, also started as a stagiaire. A vestagiaire, to be precise. 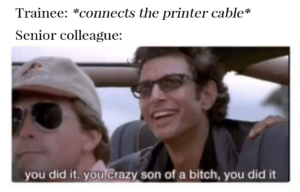 There is one other special breed of trainees, or so they believe: cabinet or presidential trainees that work directly with the stars. As they are so close to power, they shine of reflected lights, more or less like a mirror hit by the moon light. Because of that they soon develop their own specific jargon: 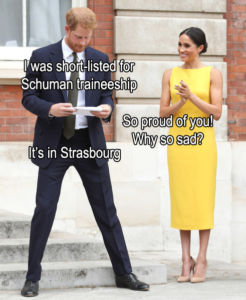 In any case, don’t forget that the EU is not only BrusselsBrussels (abbr. BRU, French: Bruxelles; Dutch: Brussel), officially the Brussels-Capital Region (French: Région de Bruxelles-Capitale; Dutch: Brussels Hoofdstedelijk Gewest), is a region of Belgium comprising 19 municipalities, including the City of Brussels, which is the capital of Belgium. The Brussels-Capital Region is located in the central portion of the country...! Some trainees, after a short briefing in the Belgian capital, are dislocated (deported?) to far away places: Representations in the Member StatesMember State (abbr. MS) is how eurocrats call a country which is part of the European Union. Clear writing guidelines recommend using EU country or EU countries instead, but some habits are hard to die...., LuxembourgLuxembourg (abbr. LUX) is one of the funding members of the European Union, with a curious inverse relationship between its size and the cost of housing. Its considerable community of eurocrats is haunted by the constant feeling of being ignored by their colleagues in Brussels. Or the rest of the... or even outside of the map: StrasbourgStrasbourg (abbr. STR) is the place you don't want to go to. It is also one of the seats of the European Parliament (together with BRU and LUX). Conveniently located between the Vosges mountains and the Kingdom of Mordor (a "dying land not yet dead"), it is impossible to reach.... You can recognize them easily because they don’t react to the word “networking” and consider Belgian beer cheap.